A week not working overtime at the theatre and, suddenly, there’s time for things like showers, new (and old) friends, and paintings.  Mi piace!  Even if I love running around backstage more than I dare say, it’s nice to get a week’s break to focus on school, restaurant shifts, and some time at the house.

So, there’s kind of a story behind this painting (surprise).  I have now done two road trips with The Italian- the first through Italy/Germany/Austria/Czech Republic, and the other one through Umbria.  Both trips started out with Perugia as the first directional point on the mental navigation map.  Both times, we just started going up and down the many Marche hills, keeping a lazy eye on the mountains to the west and trying to convince ourselves that we are gradually getting closer.  Both times, we end up at a crossroad with a sign pointing to near-by Senigallia; a coastal town that is very much north of Ancona (our starting destination) and not at all en route to Perugia.

But that’s alright, because both times, we thoroughly enjoyed the detour- with sights like this as far as the eye can see, how can one not?  This is the view that I would like to have from my front porch: gently rolling hills, sunflowers, maybe a few grape leaves, and the azzurro horizon of sea and sky in the distance.  Add a cat, fresh basil, and a sketchbook, and I’ll be the happiest girl on the planet 🙂 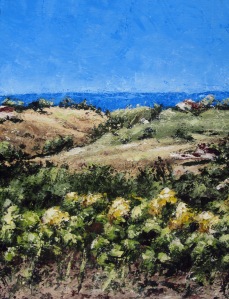